Coombe Wood School
We now have two years worth of pupils making their way to the school with inadequate protection for those crossing Castlemain Avenue.  This is acknowledged by everyone but the permanent solution whereby those pupils coming by tram cross Coombe Lane at a new crossing above Melville Avenue is still to be implemented.  We have had our say but the pressure to open the school was too great.

The permanent buildings are taking shape.  They are huge – as  expected.  Seeing them in real life reminds us of our acknowledged but ignored concerns regarding the unnecessary closeness to the first few houses of Melville Avenue.

Traffic along Melville at dropping off picking up times has increased from last year.  Presumably it will increase again next year and so on. We note that the Council’s no dropping off scheme has extended to include at least one secondary school.  When the permanent crossing is completed we will look again at asking the Council to consider these roads a no-dropping off area.

Individual  Planning Applications
David and Peter have done a fantastic job in identifying and organising our response to inappropriate applications in our area.  The key developments over the last year are as follows.

23 Melville Avenue.  To me and to many others this is a very good development.  It is not too large and it is traditional in design.  It shows good design can blend in.

50 Castlemaine Avenue. As mentioned last year, this development was rejected partly based on size – which was encouraging.  A second smaller application was submitted which was far more sympathetic and after consultation with the immediate neighbours we did not object.

As well as a smaller design, we asked for the balconies to be side obscured – which was mandated by the officers.

What did these two applications have in-common.  They both have one entrance door. They are traditional in style. They have bins within the main building.  They did not overly overlook their neighbours at the back.

These are the four design criteria we will always insist upon going forward.

As well as the good, there were at least four poor applications which were rejected or withdrawn at various stages this year.  One of these was rejected by the Planning Committee overturning the recommendations of the planning officers.  Sone sense seems to be breaking out.

However as I mentioned last year the development at 148 Ballards Way is no way in keeping with the local area as its design includes metal elements and glass balconies to its façade and a series of flat roofs.  During the meeting where the application was approved, one of the Committee members indicated that a significant number of the houses in the area had flat roofs.

This is a potentially misleading statement and we have gone through the two stage formal Croydon Council complaint process and we are now raising the complaint with the Ombudsman.  We know we cannot reverse the judgement but we hopefully can obtain some kind of acknowledgement that the process was flawed in so much that the planning officers do not give the  Committee sufficient information to come to an informed decision. In the case of 148 Ballards Way all the planning officer stated in his report was that “there is no uniform style of the buildings in the area”.  Whereas that might be true, all the buildings have pitched roofs as their main roof style.

The councillor who made the comment about flat roofs based it – in my view – on the information pack in front of him which showed 148 and the building next to it having flat roofs as a subsidiary design element .  The Councillor – who is not resident in the area – probably assumed these features were typical of the area.  Which obviously they are not.

We are asking the Ombudsman to recommend a more detailed description by the planning officers of the style of area to help the Councillors in their deliberation. For example a checklist detailing say ten architectural features of the area.  We know the Officers object ot this as it will restrict their scope but given the potential miss-statement at the planning committee  for 148 Ballards Way, we might a chance with this.

A Croydon Mayor
Away from Planning and the school, the CVRA is supporting the campaign for an elected executive Croydon Mayor who would be in charge of the Council.  It would be similar to having a London Mayor but one just for Croydon.  We believe the London mayor was a good initiative in raising the profile of  London and having someone to give credit to and to blame. and believe the same could apply to Corydon.  We need 5% of the electorate to sign for the idea to go to a referendum which will be decided upon a straight yes or no.  If yes then then we will have a mayorial election – at the same time as the next Councillor Election.

We know from the London experience that an electorate will vote for a candidate from somewhere outside the dominant party – if that candidate is thought of sufficient quality.

Peter Knight
After many years service to the CVRA Peter Knight is retiring from the Committee to spend more time on charitable work.  We thank Peter for his work . We will need a volunteer to oversee applications in the Northern part of the area.  It is a rewarding role . 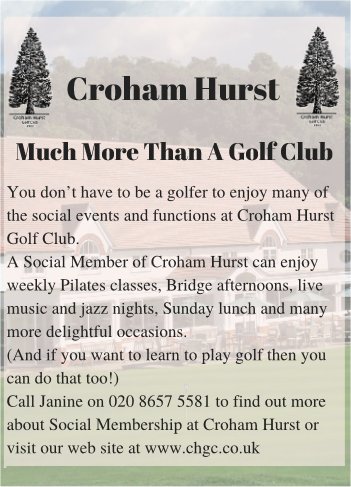